Holy Week, Coronavirus, and the Passover

It’s Holy Week! That means Christians the world over are remembering Jesus’ humble entry into Jerusalem, His last supper with his disciples, His substitutionary suffering and death on a Roman cross, and His triumphal resurrection. What a week!

However, we likely aren’t remembering so well because there is a malicious viral distraction occupying every neighborhood discussion, news story, and online meeting. Pressing through the fog of separation comes a reminder that our God is a mighty deliverer. In Hebrew it’s called pesach; we know it as Passover, and it begins this Wednesday as the sun sinks below the western horizon.

No matter the mandatory isolation, observant Jews will keep the Passover table as their ancestors have for 3,500 years. From the book of Exodus, they will read and remember every detail of God’s deliverance of the children of Israel out of bondage in Egypt through the 10 plagues it required for Pharaoh to “Let my people go.”

It’s that tenth plague that should most get our attention, for it required the blood of an unblemished lamb to be spread on the vertical and horizontal beams of their doors so that the angel of death would pass over, thus averting the demise of the firstborn.

From then on, a lamb would be sacrificed in the Temple each year to cover the sin of the nation until the Lamb of God would come to take away the sin of the world.

This Holy Week we are crying out to God for deliverance from a deadly virus that unfortunately separates us from each other. Let us cry out even more for deliverance from the deadly sin that has long separated us from God. Let us gather hearts at the fulfilled Passover table where Jesus initiated in the New Covenant the communion of His broken body and shed blood.

Though it was prophesied that the government would be on his shoulders, political tensions were higher than any election year, ever.

Truth was hard to find. Yet He hid in the midst of them. All of them.

One side had manufactured stories, the other a painful fading hope.

How could all the miraculous glory, have come to this?

Had they even listened, even for a while?

Jealousy-filled chants, “Crucify him!” incited the crowds to join.

Some, a week earlier, felt the sun rose in His eyes as they offered a chorus of praises when He entered the Holiest of Cities riding on a donkey’s colt. That brief collective of public sentiment, alive with expectation that this Jesus could be the messiah they had longed for, was already in the past.

Overnight, as it is with unseen forces, stirrings of passion waned while fickle public opinion and silence prohibited the Truth from being revealed.

Where was the man whose eyes were healed with mere mud? Did Lazarus “come forth?” Did the one who first heard the words, “I am the resurrection and the life” run to meet Him on that day?

As history unfolds we are painfully aware of the answer. As if present among the volatile crowd and absent friends, our sin sanctioned His death on a cross.

The sun was darkened as rocks shuddered and split when their crucified Creator’s spirit departed from His body crying out, “Father, into your hands I commit My Spirit.”

How is it that this One’s life story could end with joy that would fill the torn earth and last till the end of time?

The revealed reversal of circumstance of every human life begins with the simple words, “Early on the first day of the week, while it was still dark.” The unthinkable had occurred. The tomb where He was laid had no body. Those who were a witness to that morning remembered the life in His previous words to them: “I am going away, but I will come back to you again. I have told you these things before they happen so that when they do happen, you will believe.” (John 14:28a, 29) 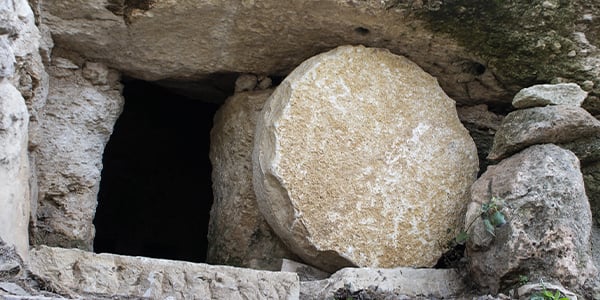 The Truth was no longer silent, nor does it hide from us today. Resurrection, the culmination of His miraculous glory, reignited hope that can never again be destroyed. Jesus, the One handed over to die for our sins which were a blockade to a relationship with God, was raised to life to give us the right to now and forever call God our Father.