What Are Superfoods and How Are They Beneficial?

You don’t want to miss this! Have you heard about the latest superfood? Have you added it to your shopping list? It’s the most nutritious food to be discovered on the planet yet!

Intrigued? I hope so!

The truth is, I’m not about to introduce the latest superfood you must run out and buy immediately or you’ll never be truly healthy. However, I do want to talk about superfoods.

Dictionary.com defines a superfood as “a food considered exceptionally good for one’s health and for boosting the immune system owing to its naturally high content of vitamins, minerals, fiber, antioxidants, or omega-3 fatty acids.”

This sounds great; however, there isn’t actually a legal technical definition for superfood so companies can use it however they want on any food they sell. The term has been popularized by the media and has become a marketing scheme as society’s interest in food and health has increased.

That said, many of the foods we now call superfoods have numerous health benefits and it would serve our bodies well to eat them regularly.

Would you consider a banana a superfood? Maybe not. But early in the 20th century American’s did label it such after the American Medical Association announced that bananas could relieve, maybe even cure, celiac disease. The United Fruit Company marketed this information and a banana diet craze was born.

Maybe you’ve tried some or all of these. Did you notice a difference in your health? Depending on what your diet consisted of prior to adding these foods and depending on what they replaced, you may have noticed a dramatic improvement in your health. But you also may not have noticed a difference at all and, therefore, abandoned the often artificially expensive superfood.

With so much money being thrown at marketing for processed, refined, and fast foods, it isn’t necessarily a bad thing that the media is celebrating superfoods. It’s a great way to encourage the consumption of fruits and vegetables.

The downside is that some companies try to make a superfood better by refining it into a pill, powder, bar, or shake. While this may cushion their bottom line, it isn’t typically better for the consumer. This type of processing often strips the food of the very thing that makes it super.

Around the world, the populations who live the longest, healthiest lives have traditionally based their diets on superfoods. These areas of the world are known as Blue Zones and have become the focus of much research to determine why they live longer, healthier lives. 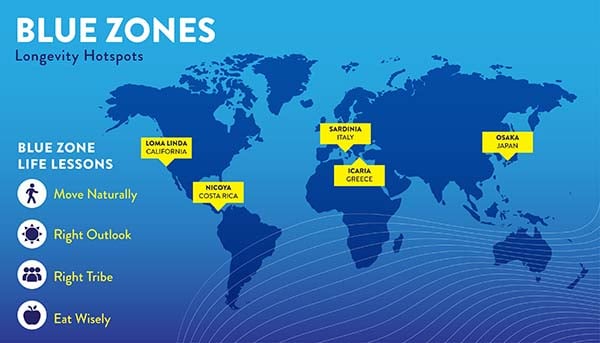 Examples include traditional Mediterranean and Japanese communities. These traditional communities have eating patterns that are heavily based on unprocessed plants, including vegetables, fruits, legumes, nuts, and whole grains. It isn’t one specific food in their diet that makes them healthy; it’s their overall eating and lifestyle.

Eating a variety of mostly plant foods, being physically active, and having good community relationships are just a few of the factors that the Blue Zones have in common which enhances their longevity.

Instead of focusing on the next new food to be labeled “super” or buying supplements supposedly packed with nutrients from superfoods, take a look at your total eating pattern. Aim to eat a wide variety of unprocessed foods – particularly plant foods. Certainly, include foods like blueberries and kale, but also add other (typically less expensive) foods such as apples, carrots, onions, or romaine lettuce.

If you’re not sure where to start, consider these superfood categories and subcategories:

This is certainly not a comprehensive list of all the plant foods that can be found in gardens, grocery stores, or farmers markets. With so many foods to choose from, food boredom is easy to avoid.

Try to eat lots of different colors too. Not only does the spectrum of colors make a pretty plate, it also means you are getting a variety of nutrients. Some examples of the different nutrients found in each color category of foods include:

Each of these nutrients has protective properties that may help prevent everything from heart disease and cancer to premature aging. That sounds pretty super to me!

Try not to get caught up in the hype of each new superfood, especially if the source of the hype is also the company selling the product. Instead, consider rotating in a new, unprocessed plant food from the options available at your local grocery store or farmers market. Involve the whole family by letting kids pick too.

Consider trying new recipes with these new foods or substituting them into recipes you already love. When you find a new favorite food or recipe, add it to your collection of regular meals. Consider starting your very own Blue Zone home.