The Awe of Autism

What do you do when God brings you to a valley? A valley that is longer than you want it to be? Rockier than you feel is necessary? Darker than you are comfortable with? More isolated than you could’ve imagined?

“Now to him who is able to do immeasurably more than all we ask or imagine, according to his power that is at work within us.” Ephesians 3:20

A valley is a place where you are strengthened and stretched. In the valley you gain endurance, you gain focus, you learn and grow in a way that can’t be done anywhere else. It is in valleys that we learn to fully lean on the Lord, trusting Him to lead us through the journey. We will all experience valleys in our lives. Every valley will be different and each one will be difficult. Join us as we walk through two different but similar valleys of Autism.

According to Autism Speaks, “Autism or Autism Spectrum Disorder refers to a broad range of conditions characterized by challenges with social skills, repetitive behaviors, speech, and nonverbal communication. The Centers for Disease Control and Prevention (CDC) estimates that 1 in 59 children is affected by ASD.”

Jennifer: “Parents of children with autism do not want sympathy; we want your understanding. I absolutely love being a mom to my son. He is such a joy, such a light, and being chosen by God to parent him is an absolute honor.

“Maybe in your situation, you wouldn’t call autism a valley. My 10-year-old son has been diagnosed with high-functioning autism. I asked God why and He responded, ‘stop looking at this like he’s broken. He is special and set apart by my choosing. This will protect him from many things.’

“This valley causes me to lean on God, trust in Him, and focus on what He has for our future. My son is not part of many conversations the kids have at this age; he doesn’t want to do the things they do and he is protected from a lot because he is different. His desire to be a pastor started when he was 3. He has ministered to me many times over the years and continues to do so. He has wisdom and discernment far beyond his years. He is different, he is special.

“What you don’t see, what you may not know is that it is challenging. I’ve learned a lot about my son since the diagnosis three years ago. More than anything I’ve learned that understanding is the most powerful ‘tool’ in being a mom with an Autistic child. If I can understand why my son does the things he does (because he can’t tell me), then I can prevent, help, and teach.”

Karen: “It is scary raising an Autistic or special needs child even if he is high-functioning. You don’t know as he is growing up if he will ever be able to take care of himself. Able to drive, live on his own, take care of money, get a job, or if he’ll be on the street. You know that you will not be here forever and wonder if anyone else will care for him if you are not here, or just let him fade away. That is the worst feeling of all.

“I knew since he was an infant that something was different with my son. I remember when he was about 7 months old he had a play date with a 6-month-old. We sat the two of them down on a blanket with lots of toys. In one hour, she moved and scooted herself all the way around my son on the blanket and he did not move at all. He was still sitting in the spot I put him in.

He would study his toys, see how they worked. He would roll a car on the floor while he laid there watching the wheels go around, then pick it up and look at the wheels. He could do this for 15 minutes, rolling it then looking at the wheels.

“We were told by my son’s first daycare that he needed to be tested by the school system at the age of 2 ½.  So, they did some tests and started him in a program in the school system even though my son had not yet been diagnosed. At age 3 it was suggested that we see a psychologist and get him tested. That’s when my son was diagnosed with ADHA and Asperger’s (a high functioning Autism).

“We kept my son in the public school system until I realized that he would never pass the standardized tests. The system would just push him through until graduation, not worrying about teaching him much. We then started private school hopping. It took four tries to get the one that worked best for him.

“My son graduated from high school last year at the age of 21. He did it; that is, with help from tutors. We are now working on his driving skills. He has had his permit for over a year now. It took seven tries for him to pass the written test. He is practicing weekly to get to where he can take the driving test. 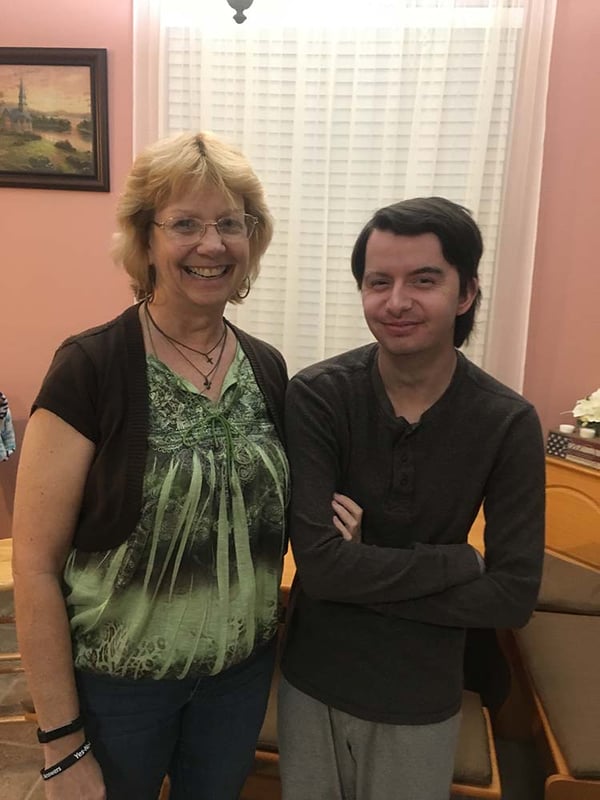 “There is a program that works with special needs kids after graduation. They train them to work in all areas of a recycling plant. My son has been there now for six months and is learning about what is expected of him on a job – the things that we take for granted. He will be there for another 12 months and they will help him find a job when his training is over.

“In my son’s younger years, he had what I would call his quirks (Autistic characteristics). He has outgrown most of them now. There was a lot of pushing and letting him see what life was about and not trying to treat him special that I believe has made him the man he is today. There were times while he was growing up that I never thought he would even graduate high school, but here he is now, working, driving, and even writing a book.”

When Jennifer reached out to an Autism group she participates in and asked them, “What is something you wish you could tell the world when it comes to Autism?” she received numerous responses as each child with Autism faces different challenges.

Educate yourself AND your children to understand why our children do things your child doesn’t. Our children know they are different and may not show emotion when other children make fun of them, but inside it hurts them deeply.

Believe us when we tell you why our child needs headphones, needs space, needs to walk away for a minute, why they can’t look you in the eye. (No they aren’t being defiant.) You only see a small part of who the child is and how he or she reacts.

Compassion goes a LONG way. Pray for us (it’s not easy) and pray for our kids. Our children (although each one is different) want to be included, they want to be shown attention. Just because they don’t react the way another child would, does not mean they don’t crave love. Isn’t it interesting how much compassion we lack until we walk through something?

Jennifer: “Try to remember what you see on the outside is usually a reaction to something going on that you don’t see or understand. This is why praying for understanding is so important.

“I will give you one example: each Sunday when we go to church my son keeps his head down. People say hello, tell him to speak up, make him shake their hand. This is what’s going on that you can’t see: he is processing all the various sounds, all the colors, all the motion, and it overwhelms him. Think of sitting on the floor of a ball pit and five dozen 3-year-olds are screaming and jumping all around you while you try to focus on reading a book. This is what my son experiences every day.

“As parents, we want to scream to the world that it’s okay to be different! We are all children of God, chosen and set apart for a purpose He has given each of us. It’s not supposed to look the same.

“So the next time you see a child with autism, say hello and give them a compliment. There’s no need to touch, shake hands, or hug. Just acknowledge them. They may not respond on the outside, but on the inside it has an impact.”

If you want to learn more about Autism check out these suggested resources:

Thank you for walking a while in our valley.