As I'm writing this the country is in a quite literal crisis.

Businesses are being shut down, plans are being disrupted, stores are being raided and, in some instances, lives are in jeopardy. In light of this, I would like to talk about laughter. I think at this moment, right now, we should be doing more of it.

If you've now written me off as a delusional kook and are scrambling to click off of this blog as soon as possible, I wish you God's speed.

If you stuck around, may I tell you a story?

The church was packed beyond capacity. Standing room only. It was a weird crowd. More than half of the people were in their 20s, laughing hysterically at practically every joke or scenario I lobbed in their direction. It was my best comedy show yet.

But there was another group represented in the audience. They were small in number but visibly united in their sentiment:

"The church sanctuary is no place for laughter."

It didn't take apostolic-level discernment to know their thoughts. Their folded arms, furrowed brows, and tightly pursed lips painted a detailed picture of disapproval. Then I said a statement that, if rocks were readily available (perhaps on the back of the pews with the hymnals), I would have been pummeled right there on the church stage… in Jesus' name, of course.

The statement? Here it is (get your rocks ready):

"If you're Alpha and Omega…the beginning and the end…how can the middle not be funny?"

I said this in defense of my thesis that God has a wonderful sense of humor. Their brains almost exploded. How dare I suggest God laughs, much less has a funny bone? Feeling their complete disdain, I decided to take it one step further:

"If you think God doesn't have a sense of humor, look in the mirror. That should show you how truly funny He is."

May I give you a few delightful examples of God's sense of humor?

First, put your stone down. I mean it. Put it down.

"3 Then Pharaoh will think, 'The Israelites are confused. They are trapped in the wilderness!' 4 And once again I will harden Pharaoh's heart, and he will chase after you.[a] I have planned this in order to display my glory through Pharaoh and his whole army. After this the Egyptians will know that I am the Lord!'" ~ Exodus 14:3-4

This is a great display of power and a slight bit of humor, precisely BECAUSE He has the power.

Moses knew the plan. God told it to him. But the people started to panic. And, to be fair, seeing the people that previously enslaved you rushing toward you on chariots is bound to rattle the nerves a bit.

And even with all the exploits God had wrought to and through Moses thus far, even he was shaken. How do we know? Well, first he made a grand declaration to the people of Israel:

"Don't be afraid. Just stand still and watch the Lord rescue you today. The Egyptians you see today will never be seen again. The Lord himself will fight for you. Just stay calm." 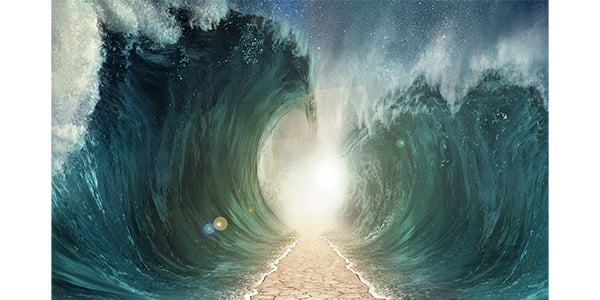 I remember that scene in the movie The Ten Commandments. It's powerful. But the next verse implies that there may have been a moment to which we weren't privy. A private moment between just God and Moses. How do we know? Here's the next verse:

Then the Lord said to Moses, "Why are you crying out to me? Tell the people to get moving!"

That's just the best. And yes, I see great comedy in it. Moses made this amazing declaration to the people of God's power and intention. But here's the thing, there's a small issue that still needs addressing: THE RED SEA!

So Moses must have gone behind a rock or something and said, "Um, God, can I holla atcha for a minute?"

God's reaction: Stop crying. Get moving. There's a joke in the works here, Moses. The demolition of Pharaoh and Egypt is the punchline.

If you haven't read this account, I'm guessing you've at least saw The Prince of Egypt. So you know the rest of the story. It's a familiar theme throughout scripture:

God gets the victory…and probably a good laugh at those who think He won't rescue and defend His people.

"11 Abraham and Sarah were already very old, and Sarah was past the age of childbearing. 12 So Sarah laughed to herself as she thought, "After I am worn out and my lord is old, will I now have this pleasure?" ~ Gen 18:10-12

From the previous story and this one, I see a pattern with God. He likes meeting human impossibility with human absurdity. That's really where His humor seems to flourish.

When God tells Abraham the greatest of jokes, Sarah is outside of the tent and she bursts out laughing. Why was this laughter wrong? Because she was committing a horrible infraction that seems to be of great offense to God:

She was laughing at God, not with God.

Laughing with God acknowledges the absurdity of the situation but also acknowledges God's power of punchline.

Laughing at God suggests He's not able to close the deal. Everything in scripture suggests He's not a fan of having His sovereignty questioned (see the book of Job for the greatest "who do you think you are" dress down in history).

So, Sarah laughed. She then sprang into action to help God with his punchline. But God is never in search of comedy co-writers. You and I don't have the chops to help God with His jokes. If He provides the set-up, rest assured, the punchline was completed long before you were even on the earth. Abraham and Sarah's little comedy improvisation (a.k.a. Hagar) had far-reaching implications, none of which were funny.

But God, being eternally faithful, held to His promise. Sarah and Abraham had a son. God picked the name. Isaac. What does that mean? "He laughs." Here's how Sarah put it:

"God has brought me laughter, and everyone who hears about this will laugh with me."

Jesus the Christ is starting His earthly ministry. He'll be traveling. He'll be preaching. He'll be healing people. It's going to be a big operation. So when He goes looking for staff you would think he would go to the synagogue, right? The place where He could find the most learned, the most studious, the most devout men for the mission at hand.

Makes sense? Well, good jokes never make sense. That's what makes them good. The pure absurdity of it all somehow seems to work. That's what makes us laugh. So, in true heavenly hilarious fashion, Jesus picks the 12 most seemingly ridiculous choices possible.

Never in a million years would you choose these men for a church plant. There were cussing fishermen, braggadocios brothers, a cheating tax collector, and let's not forget the guy whose betrayal would lead to Christ's death. These guys? Really? What a joke.

One of my favorite pictures of the sense of humor of God is when after the resurrection of Jesus, he shows up on a beach looking for his friends. These stooges who deserted him when he needed them the most were fishing. FISHING! And these master fishermen, who previously had made a living fishing, were out in the boat all night and caught nothing. Then here comes Jesus (who they don't recognize) with a really, really funny line:

"Friends, haven't you any fish?"

Isn't that the best? Hey knuckleheads, any fish yet? It's so funny. It's so playful. So loving. 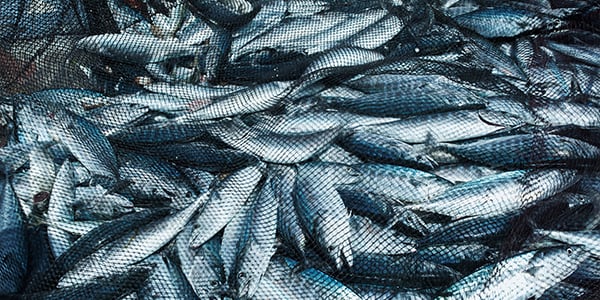 He then tells them where to get the fish and that's when they realize it's Him. When they get back to

the beach he has food cooking for them.

"Come and have breakfast."

He made these goofballs breakfast and ate with them. If that's not encouraging to you I don't know what is. And why does that breakfast matter? What joke is it setting up? We see a good indication in Acts 4:

"When they saw the courage of Peter and John and realized that they were unschooled, ordinary men, they were astonished and they took note that these men had been with Jesus." ~ Acts 4:13

These jokers…these seemingly colossal walking punchlines in sandals turned the world upside down all because they had been with Jesus.

There's a lot of anxiety right now. The fear in the air is palpable.

Feels like the tasks ahead are a little too much for us.

Laughter and joy seem like fond memories rapidly fading in the distance.

He's got this. So why not laugh?

Sherri Lynn has been a radio professional for well over a decade. She has her degree in Communications as well as Biblical Studies.  Sherri is a writer, comedienne, and former youth pastor. She wrote and produced a comedy DVD entitled "The Very Funny Church Comedy Show: Together We Laugh", wrote and starred in the stage play musical "The Bold and the Sanctified" which starred American Idol Winner Ruben Studdard, and authored the book "I Want To Punch You In The Face But I Love Jesus."

Watch the video below to hear more about Sherri's Medi-Share experience.