There Used to Be M and Ms

For as long as I can remember, when my father came home from reserve duty in the military, he brought each of my brothers and my sister a pack of M & M’s. Stretching past his military service as a chaplain, he and my mother extended the treats to us when we returned home from college. Each time we arrived with our luggage (sometimes filled with dirty laundry), we’d walk into our rooms to find a bag of M&M’s waiting on the pillow.

When they moved away from the house where they raised five sons and a daughter, their new home carried the tradition. Bringing our wives, then children, and now even our grandchildren, the familiar brown-bagged treats (sometimes the yellow bags of peanut M&M’s) from my parents awaited every family member.

Nearly succumbing to congestive heart failure, my mother endured a dramatic and difficult year—as did my father.  A US Navy chaplain (Captain) and pastor for nearly 60 years, my father stepped into the role of caregiver for the first time, and I watched the process take a toll on him.

It felt odd. While I’ve cared for my wife with severe disabilities for more than 32 years, I’ve never seen my dad in this role. I found myself placing a hand on his shoulder much like he did for me many times following my wife’s now eighty plus operations. He sat with me in countless ICUs, hospital rooms, and waiting rooms. Now I sat with him.

His seasoned faith remains intact and strong, yet he struggled to wrap his mind around the relentless assault of continued medical setbacks. With the same gentleness and encouragement he offered to me over decades of caregiving, I returned the favor.

I’ve often heard that, “…There’s no pain like watching your children hurt.”  Watching your parents hurt must run a close second.

With a herculean effort by medical staff, along with my mother’s grit, she pulled through. While not where she’d like to be, she’s further than most expected. After a couple of months away from them, we returned to their home for Thanksgiving. They look tired, older, but optimistic. The family pulled together, and the house looks great. The only significant difference I noticed was an oxygen tank in their bedroom.

For the first time in my memory, however, no M & M’s waited on the pillows. The absence of those treats indicates a passage, and a farewell to parts of who they used to be. Their home stands in a heavily wooded area of upstate South Carolina. As we prepare for Thanksgiving, the trees surrounding their home continue shedding an entire color palate of leaves. The loveliness of autumn is a sad one that brushes hearts the same way the wind grazes branches.

So it is when watching those who loomed large in our lives diminish in vigor, but not in beauty. As many will attest, it’s the shedding of smaller things—the wisps of common things taken for granted—that often bring a tear.

Deep feelings often rise to the surface faster during holidays. For many Americans, Thanksgiving marks the beginning of a difficult season of slow goodbyes, bittersweet celebrations, and, for some, the ache of absence.

Yet, not all is sorrow. Slowing our lifestyles to the pace of our hearts, we can cling to each other a bit tighter. After dinner, we can pause a little longer at the table—or sit quietly for an extra couple of minutes with those we love. If a chair is empty, we can choose to fill that seat with cherished memories.

Families across our country feel this kind of heartache— one so deeply connected to caregiving. Helping those caregivers is no easy task. Yet, that help remains critical to not only the caregiver, but also their loved one. Part of that help is assisting caregivers in grieving without them sinking into despair. Doing so, always involves redirecting our gaze to gratitude.

The treats I’ve enjoyed for a lifetime no longer await me, but the loving hands that placed them are still here to hold. Placing that candy on their pillows instead, I now possess a greater understanding of the joy they both shared—for a lifetime.

This Thanksgiving, I discovered gratitude can be found in something as simple as bag of M & M’s. 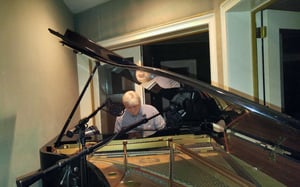 Peter Rosenberger hosts a radio program for family caregivers broadcast weekly from Nashville, TN on more than 200 stations. He has served as a caregiver for his wife Gracie, who has lived with severe disabilities for more than 30 years. His new book, 7 Caregiver Landmines and How You Can Avoid Them releases nationally Fall 2018. @hope4caregiver