Caring for the fatherless: the beauty of foster care and adoption

May is National Foster Care Month! According to childwelfare.gov there are more than 407,000 children and youth in the foster care system, and only 34% are placed with relatives and kin. So where do the rest of those kids end up? In some instances, children are placed with families like Medi-Share employees Matt Cunningham. Read Matt’s story below of how he became involved with foster care and adoption.

Our story starts when my wife Heidi and I got married. We were married in 2003 in California. We were “older” when we got married, so we wanted to get started toward having a family right away. Initially, we only thought we would have a few kids of our own.

In the first year of our marriage, we were expecting our first son. We were excited and looking forward to his arrival, but our joy turned to fear as he arrived very early. He was born at 29 weeks weighing 1lb. 10 oz. There were times we were not sure he would make it out of the NICU, but he did make it. He was our miracle baby and we are blessed to have him in our family.

After he was born, we had trouble getting pregnant again and keeping pregnancies. We have 9 kids now, but we have had more failed pregnancies than we have kids.

During this time of infertility, we moved to Colorado in 2007. This is where the second part of our story began unfolding. While Heidi was taking my son to school, she ran into a mother taking her kids home. Heidi told the mother that she had adorable children. Turns out she was actually their foster mother, and they were looking for a family to adopt these two children.

My wife, having been adopted, always had it on her heart to adopt. She called and told me with exuberance about this opportunity. I said it would be fine to start the process. In about three months, they were our foster children and about another six months later we had adopted them.

Several years later around 2011, it was hitting my heart that we were not done with adoption. We went to an adoption fair at a local church, and our hearts were touched to continue the adoption process. We signed up for an adoption service and about two months later we were fostering another sibling pair.

When they first came to stay with us, we were told they would be going with their grandparents in time. However, it did not work out that way and they remained with us. We adopted them six months later. While we were completing the adoption process, we had another biological son during that time. With all of our fertility struggles, it seemed like such a miracle anytime we would get pregnant and an even greater miracle when we would deliver a healthy baby. So we rejoiced at the addition of three children to our family!

At this point, we had six children and were satisfied with our family. We did not expect a new bundle of joy, our daughter, to enter our lives.  She is our healthy little girl.

Our family was now at seven and we had no plans to change that… but God works in mysterious ways. During COVID, my wife gifted me a DNA ancestry kit. Through the kit, we wound up finding her biological mother and her half siblings and arranged a meeting. We met them, got to know them, and found out that Heidi had two half nephews.

Her nephews came out to visit and fell in love with our family and with Colorado. They asked if they could stay with us, leaving a bad situation to come to a better one. We prayed about it, and felt the need to care for these two boys. We have now completed the adoption for one of them who turned 18 and it was an adult adoption, and we are still in the process of adopting his brother.

You may read our story and think “I could never…” but it has never been about us. We’ve simply been following God’s call to care for those who have been cared for little. And in all honesty, we have enjoyed this unexpected adventure all along the way.” 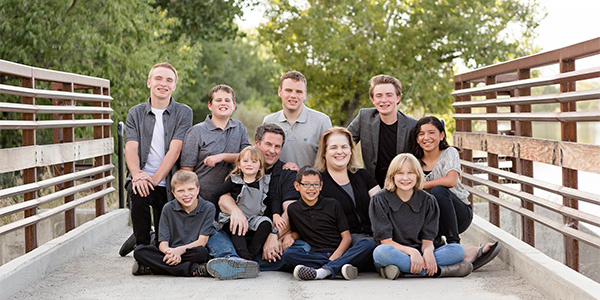 Maybe God is calling you to consider foster care or adoption. If so, start by looking up your local county offices and/or family services through childwelfare.gov. Find adoption groups in your area to see how you might get involved. Even if you are not be able to physically foster children at this time, there are still several ways you can make a difference. At Medi-Share, we’ve partnered with Global Orphan Project and CareCircle to help provide for the needs of kids and families. Learn more about CareCircle and how you can get involved here.

At Medi-Share, we’re also thrilled to be able to share in some of the costs of adoption. You can learn more by reading our guidelines regarding adoption here.