The Unforgettable Beauty of Being the Involved Dad

(Adapted from the new book The Men We Need by Brant Hansen, author, radio host, and the voice of many Medi-Share announcements on the radio!)

I read about an important man who walked away from his family to do Big Good Things. He traveled the world. He helped poor children. He made a deal with God, he said, “I’ll take care of Your children if You take care of mine.”

It didn’t work out that way. For his family, the story ended tragically, involving depression, loneliness, even suicide.

I wonder if maybe God didn’t actually sign on to that deal. Maybe the “deal” was a one-sided justification for the man to continue to do what stroked his ego rather than what God really wanted him to do. Maybe God could have used someone else. 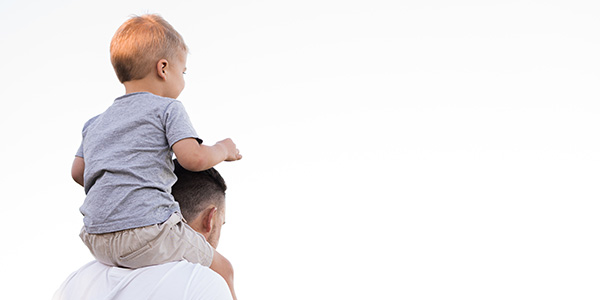 Perhaps I’m particularly aware of this struggle because it was mine too, when our kids were babies. I wanted freedom and autonomy. I kept trying to do the stuff I was used to doing, even though life had changed at home. It was enormously frustrating.

Frustrating, that is, until I made peace with my role as a husband and dad. I threw myself into it. After that, there was joy.

The garden I was given to keep—a little boy and a baby girl and a woman—was beautiful. My job? Helping them thrive and grow and bloom.

Parenting gets a bad rap in pop culture. Even in conversations when my wife and I first found out we were expecting, I kept hearing about how hard it was going to be, how aggravating the kid would be, how this next season of life was sure to be awful.

Here’s how it usually goes down, and I share this from experience.

Your wife is expecting. “This is going to be pretty exciting,” you say.

You just wait, because you won’t be getting any sleep once that baby’s born. It’s all over. It gets harder. It gets worse.

Your baby is fun. You think it’s hilarious how he’s amused by one particular stuffed dog above all other toys.

Just wait, because when that kid is toddling around, pulling down the curtains, and getting into stuff, you can’t look away for a second. It gets harder. It gets worse.

Your toddler is a blast. Everything is new and wonderful to her, from puppies to repeatedly crashing towers of blocks. She laughs all the time and wants you to “Do again!”

Just wait, because when your kid starts really talking, you’ll get tired of that sassy mouth. You’ll wish he was still a year old. It gets harder. It gets worse.

Your elementary-age kid is an absolute joy. You can take him swimming, play catch with him, and teach him hilarious end-zone dances to amuse your friends.

Just wait until he’s a teenager, because he’ll learn how much he doesn’t like you and won’t want to have anything to do with you no matter what. He’ll eat everything, and you’ll get tired of him and want him out of the house as soon as possible. It gets harder. It gets worse.

Your teenager is fascinating. You can’t get enough of him. He makes you laugh because, well, you saddled him with your exact sense of humor. You get to play video games with him. He beats you at chess, sometimes 20 times in a row. He fills your home with music, first with a screeching sound that, months later, becomes recognizably melodic, and then with the sweetness of Bach on violin. He mows the lawn—not always happily, but he does it. You catch him listening to your favorite bands in his room. He says things you never thought about before. He grows taller than you.

Just wait until he moves away, because your heart will break in two.

Brant Hansen is an author and nationally syndicated radio host. His latest book, The Truth About Us, was released in April 2020. He's also written Blessed are the Misfits and Unoffendable, which has sold more than 100,000 copies. Brant has been featured multiple time on Focus on the Family, and his writing has appeared on CNN.com, washingtonpost.com, and Relevant, among many other venues. He also hosts a popular podcast, The Brant and Sherri Oddcast. Brant is married and lives in South Florida. To find out more about his latest book, check out truthaboutusbook.com.