It is therefore recommended to the legislative or executive powers of these United States, to set apart THURSDAY the eighteenth day of December next, for SOLEMN THANKSGIVING and PRAISE : that with one heart and one voice the good people may express the grateful feelings of their hearts, and consecrate themselves to the service of their DIVINE BENEFACTOR : and that together with their sincere acknowledgments and offerings, they may join the penitent confession of their sins, whereby they had forfeited every favor ; and their humble and earnest supplication that it may please God through the merits of Jesus Christ, mercifully to forgive and blot them out of remembrance.  That it may please him graciously to afford his blessings on the governments of these states respectively, and prosper the PUBLIC COUNCIL of the whole.   To inspire our commanders both by land and sea, and all under them, with that wisdom and fortitude which may render them fit instruments, under the providence of Almighty God, to secure for these United States the greatest of all blessings, INDEPENDENCE and PEACE.  That it may please him to prosper the trade and manufactures of the people and the labor of the husbandman, that our land may yet yield its increase.  To take schools and seminaries of education, so necessary for cultivating the principles of true liberty, virtue and piety, under his nurturing hand : and to prosper the means of religion, for the promotion and enlargement of that kingdom which consisteth “IN RIGHTEOUSNESS, PEACE, AND JOY IN THE HOLY GHOST.”

You’ve just beheld a facsimile of the Continental Congress’ proclamation of the first national day of Thanksgiving in the United States of America.  Notice anything unexpected in an official U.S. Government document?

Penitent confession of their sins. The merits of Jesus Christ. The providence of Almighty God. Under his nurturing hand. Prosper the means of religion. Enlargement of that kingdom. Righteousness, peace and joy in the Holy Ghost!

But they got the date (Dec. 18) for Thanksgiving wrong! Not really. Congress later moved the official holiday to what we’re used to, the last Thursday in November. There’s a fascinating story behind that December date, though, and the months preceding it. Let me tell it to you…

On October 17, 1777, British General John Burgoyne surrendered his army to American General Horatio Gates at Saratoga, NY. The Americans had finally won one! This proved to be the turning point of the American Revolution, for when news of the victory reached France, the French came in on the side of the Colonials and American independence was assured.

But known by few is the firebrand Sam Adams’ plea to heaven that undergirded this momentous turn of events, and how that led to the Day of Thanksgiving we now hold as our cherished national treasure. The Thanks-Giving Square Foundation puts it this way:

A final roar from the Old Lion—Samuel Adams, not raging against tyranny this time, but praising God—crowns the career of the “Father of the Revolution.” He translated an ancient New England custom (by a Proclamation written with his own hand) in the most universal and beloved of all American traditions—Thanksgiving.

What Adams wrote was one, single sentence of 360 words—evidence of the outpouring of a grateful heart. What’s remarkable is that he had initiated the effort well before General Gate’s official report of victory had reached Congress. Adams knew it was already past time to praise and thank God in the midst of uncertainty and trial:

I hope our countrymen will render the just tribute of praise to the Supreme Ruler for…his Interposition in favor of a People struggling for their liberties. Congress will, I suppose, set aside a day of public Thanksgiving to be observed throughout the United States.

Indeed, on November 1, 1777, the Thanksgiving Proclamation passed. In the interim, before the actual Day of Thanksgiving, Gen. George Washington marched his bleeding army into winter quarters at Valley Forge, Pennsylvania. The ill-clad, half-starved and diseased soldiers faced a bitter winter in which many would freeze and die. On December 17, the day before the National Day of Thanksgiving, Washington issued this General Order:

Duty calling us to devoutly express our grateful acknowledgements to God for the manifold blessings he has granted us, the General directs that the army remain in its present quarters, and that the Chaplains perform divine service with their several Corps and Brigades. And earnestly exhorts, all officers and soldiers, whose absence is not indispensably necessary to attend with reverence the solemnities of the day.

Thanksgiving in suffering. Not waiting for all to be nice and easy, but laboring to praise the One from whom all blessings flow in hope of the liberties of a nation to be secured.

Even as Washington’s army prayed, the One being thanked was moving on behalf of the nascent nation. In his Almighty providence, he was turning the hearts of the French toward the Americans. On that very day, the French Foreign Minister promised the American commissioners in Paris that France would recognize American independence. The subsequent treaty ensured American victory and the blessed nation we now enjoy.

What is the conclusion of the matter?

Thanksgiving unites. A grateful people is a unified people. 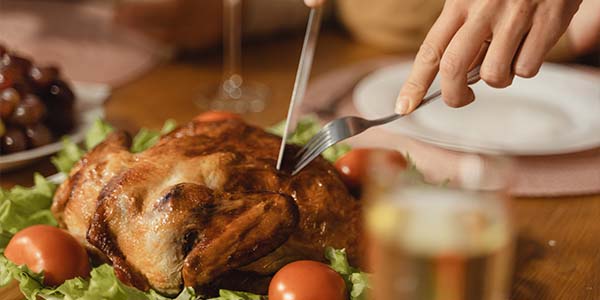 At a time when so many forces are dividing us, Thanksgiving is the annual summons back to being one nation under God. From the Thanks-Giving Square Foundation:

Thanksgiving unites people. The Continental Congress dared to ask for thanksgiving on a national scale—declaring publicly their dependence on God. Healing and harmony and growth have been the result. In gratitude we recognize our common dependence, and therefore, under God, our common humanity.

Americans, unite! It’s time to be thankful once again.