By Michael DiMuccio and Rebecca Barrack

What is the greatest fear in America? Some polls have consistently revealed the fear of public speaking as number one; however, many would say it’s the fear of being alone that tops most people’s list. The late Robin Williams actually said the number one fear is not aloneness; rather, being around lots of people who make you feel alone.

As followers of Christ, we are constantly reminded in scripture that God has called us to community. Dr. Tackett of Focus on the Family once said, “God calls us to community because His very person is a community.”

Think about the family structure. It begins because God declared it is not good for man to be alone. Once the union of man and woman is established, the natural manifestation is offspring.

How about friendships such as David and Jonathan? Would David have had any success without the loyalties of Jonathan in upholding David’s well-being over his own father’s commands? 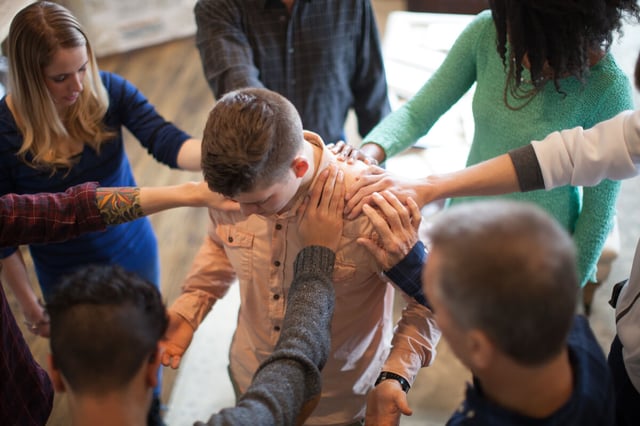 “Therefore, confess your sins to one another and pray for one another, that you may be healed. The prayer of a righteous person has great power as it is working.” James 5:16

The above verse speaks of accountability. The term “one another” appears in the Bible around 200 times, depending on your version of preference. This is no coincidence. It was God’s intention all along that we live in community, that we hold each other accountable in the faith, and that we pray for each other.

Medi-Share is just that: a community of believers with its foundations straight from Acts 2:41-47. It is there we find a recipe for what a Christ-centered community looks like.

First, there is a common faith. Those who had received the Word were then baptized. There was a common confession and a common action. They believed and were baptized into the family.

Second, they continued. These believers continued not only in the doctrines of the church, but in the sharing of their lives, the breaking of bread, and in praying for one another. This is described as being done with a steadfast spirit.

As a result, these believers saw God perform wonders and do great things. There is a benefit when the people of God come together and share their lives… continually and steadfastly. No wonder the writer of Hebrews exhorts we not forsake the assembling of ourselves together (Hebrews 10:24-25)!

Then there is this all-important ingredient of any true family… that of sacrifice. The early believers sold their own possessions and divided the goods to ensure everyone had enough. Is this not the ultimate sharing? The necessity of sacrifice has a unique power to join people together and bring them to a place of belonging.

In verse 47, we also read they were a people of praise. The underlying strength of coming together is found in the very reason we were created – to glorify and praise our Creator. Praising together seemingly holds us together and solidifies us on common ground.

Interestingly, this past spring and summer, Medi-Share had the opportunity to present the CeCe Winans “Let Them Fall in Love” tour at 10 locations throughout the U.S. At each venue, CeCe opened the stage for Medi-Share members to be interviewed, giving testimony to the program and what it has meant to their family and lives.

Some common threads of those interviewed were reminiscent of the “ingredients” found in the Acts 2 model. They spoke of the genuine care of costs shared with the community. They mentioned the cards received from other members, encouraging them through their time of difficulty. They also testified that every time they called Medi-Share they were prayed for.

Most notably, these testimonies occurred right after CeCe would sing “Never Have to be Alone.” It was right after that song that the band would bring the music down, Winans would talk about how we need each other, and then she would segue into the spirit of Medi-Share and its authentic community.

If we can be intentional about our worship to God and commitment to one another by sharing and caring in the spirit of the first century believers, we truly never have to be alone and can ensure no one else has to feel alone.

Download our Medi-Share app today and become part of our community!